Over the last decade much has changed in the travel industry. No longer is it the case that travelers have to find restaurants, hotels or taxis in a phone book directory. Technology has changed that. By simply pulling out a smartphone, likely an iPhone or Android phone, travelers can find whatever they need with a few simple swipes of a finger or thumb. Applications have been designed to make life much easier, especially in a “foreign” city or town.

While technology has made travel much easier it is only as good as the access. If a traveler is unable to charge his or her electrical devices they are not going to prove to be valuable. Most people traveling overseas will take their smartphone, electrical appliances and tablets with them. While some hotels may offer hair dryers, curling irons and irons this is not always the case. If you are staying in a cheap hotel in Paris you may find that there are no hair dryers, irons or computers in the rooms. It would be a smart decision to ask the front desk for these amenities but you cannot expect every hotel to have these items.

When bringing along electrical appliances, smartphones and tablets it is important to remember that they must be charged or plugged in for proper use. Having the wrong or no voltage converter or plug adapter could damage your electrical devices. Most modern electronics are able to take 110v or 220v power, but there will need to be a “stepped up” or “stepped down” in power when traveling from the United States to Europe, Australia and/or Asia.

In the United States power supplies use between 110 and 120 volts while in Europe, and other parts of the world, power supplies use between 220 and 240 volts. To alleviate any concerns when it comes to the power supplied to your device you may want to consider a voltage converter. If you are traveling from the United States to Europe you will need a step down converter to take the voltage from 110v to 220v which will insure that your device is getting the proper amount of power. If you are traveling from Europe to North America you will need a step up converter to move the voltage from 220v to 110v. A step up transformer or converter is one in which the secondary voltage is greater than the primary voltage.

Power adapters are also needed when traveling to other parts of the world. Power adapters are usually 110 to 120v to 220 to 240v and vice versa. These adapters convert incoming voltage to an output your device can operate on. In addition to the correct power adapter you will need the right plug adapter as well. 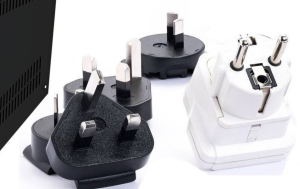